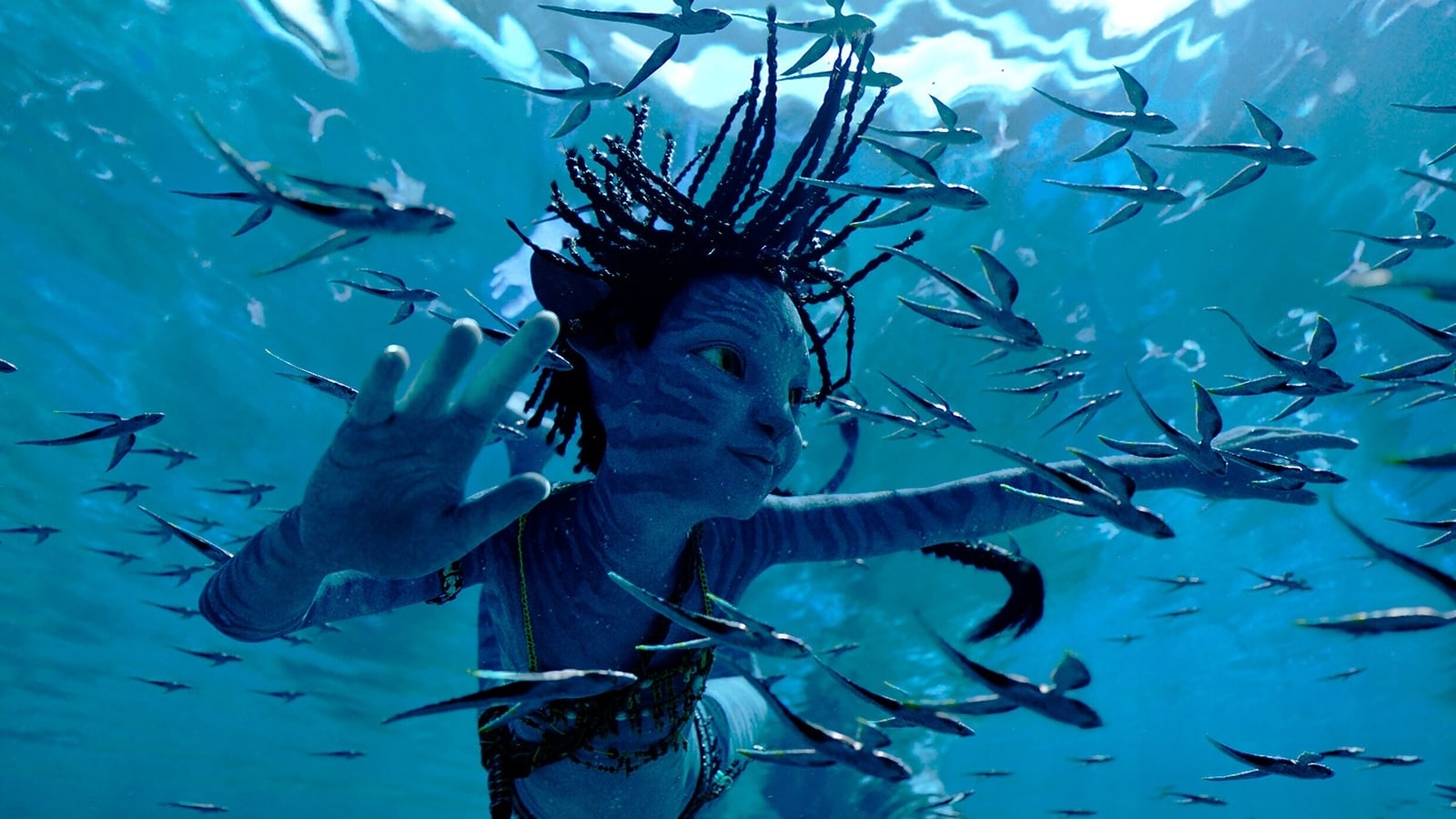 James Cameron leaves the sweeping vistas of Pandora’s forests and rehearses his vision of the seas in Avatar: The Way Of Water. Former Marine Jake Sully (Sam Worthington) left his human form in the original 2009 film to become one with the Na’vi and fight alongside his partner Neytiri (Zoe Saldana) to save the land and its people. The two have settled into the household and started a family, but as they say, peace never lasts. The Sullys’ world is under threat again and Jake must regroup after all this time to protect his family.

James plunges us back into Pandora at breakneck speed as we reacquaint ourselves with the world and the years that have gone by. Friends are few and far between, old foes return and a new generation begins to take shape. Jake and Neytiri’s children have both spirit and drive as they embark on new adventures, this time under the sea. The Way of Water introduces us to a new Na’vi clan, the Metkayina, led by leader Tonowari (Cliff Curtis) and his wife Ronal (Kate Winslet).

Shifting between the floating mountains and dense forests, the Metkayina’s lifestyle is peaceful and remains a safe haven for the Sully family. A new young character reminds the “refugees” that “the way of water has no beginning or end.” It is this lesson they must learn about the events of the film, just as Jake learned about the connection between all living things in the first film. If you haven’t seen the first movie, the introduction of old and new characters can be a bit overwhelming as the story moves toward a grand finale, inevitable clash.

The underwater scenes in The Way Of Water are absolutely breathtaking, worth the price of the admission ticket alone, and the wonder on the faces of the Sully family as they witness this new paradise mirrors the amazement on our own. James Horner’s score adds to the moving sequences.

Halfway through the film comes to rest in what he has to say. Jake has no choice but to face the battle ahead, even when the safety of his children is at stake. Ancient threats from the Sky people persist as they continue to plunder Pandora for its natural wealth. In the first movie it was the mineral unobtanium and now it’s another elixir for humanity. (Read also: Avatar The Way of Water First Reactions Praise James Cameron Movie As ‘Masterpiece’, Critics Say It’s Better Than Part 1)

The motion capture performances and other animations are much smoother and more lifelike this time around. Sam and Zoe ground the film with their continued intensity, while their youngest son Lo’ak (Britain Dalton), another interesting new character, is annoyed by the expectations placed upon him. Sigourney Weaver returns as Jake and Neytiri’s adopted daughter Kiri, who has many new mysteries. There is so much more to discover with her connection to the world of the ‘aliens’ and Na’vi. But that could be for a future movie in the franchise.

The computer-generated environments also look amazingly real, thanks to the many technological advancements that have occurred in the 13 years since the 2009 film first premiered. The 3D also has more detail weaved in both above and below ground and doesn’t feel overwhelming. It’s something that can only be experienced on the big screen. The finale of The Way of Water is grand, messy and emotional, with several echoes of James’ own Titanic (1997) and the warm, emotional ending. But the acclaimed running time of 192 minutes isn’t really a factor here. The action keeps you entertained on the big screen as the screenplay from James, Rick Jaffa and Amanda Silver sets up scenarios that can move the franchise forward.

Much has been said in recent years about the slow death of the theater experience. Avatar: The Way Of Water is a stunning spectacle put on by a passionate filmmaker who knows exactly how to fuse action and emotion for an enjoyable time at the cinema. Do not miss it.