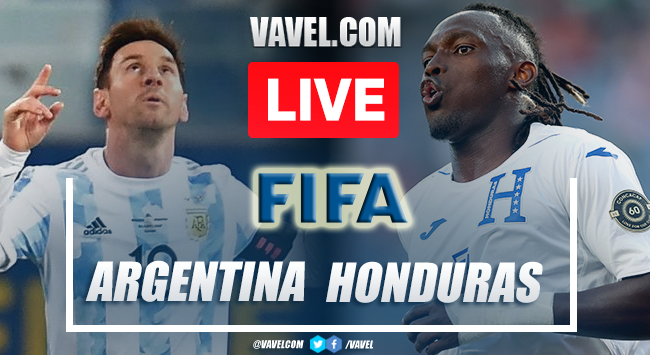 The first half of Argentina’s partial victory over Honduras in a friendly match is over.

GOOOOOL! of Argentina, a left shot from Messi to the right, beating the keeper to make it 2-0.
The penalty kick came after Lo Celso was drawn into the penalty area.

One minute of compensation is added.

Tempers flare up, escalating to pushing and pulling. Deybi Flores gives Messi a blow, which upsets the Argentines.
Flores is shown the yellow card.

Luis López Fernández almost gave the ball away, losing to Martínez, but managed to recover and clear the ball.

Honduras tries to get out, but the Argentines won’t let it.
The game is starting to heat up, several fouls are already being called.

Lautaro Martinez remains in the Honduras area after a collision with the goalkeeper, who is already receiving medical attention.

Honduras have been cornered in their own area, with some great runs down the flanks, but Albiceleste’s defense cut them off well.

Argentina continues to pose a threat, but they made several mistakes in their final touch, which the Hondurans took advantage of.
Messi had a first chance, but the goalkeeper was well stopped and saved the ball.

GOOOOOL! for Argentina, Lautaro Martinez popped up in the middle after a great cross from Messi coming in from the left, for Martinez to just push him in.

Messi falls into the area, but the referee does not award a penalty, the pulga went down the right flank looking for space between the defenders, but they cut him off.

Argentina got the first chance of the game, with a long shot that went just wide.

These first minutes the ball started to move, Honduras looked for the first chances, but Argentina started to get the ball under control.

The match between Argentina and Honduras is set to start at the Sun Life Stadium, where there is a good attendance.

They go on the field

Both teams take to the field for the start of this friendly at Sun Life Stadium.

The XI of Honduras

Argentina national team coach Lionel Scaloni spoke at a press conference in Miami ahead of the friendly against Honduras, the penultimate test for the 2022 World Cup in Qatar.
“Romero’s situation really bothers me because I would love to have him here and he’s stuck in Argentina with the visa issue and can’t travel. It’s a real problem because it’s the last date we have to get together and train and we will’ I can’t have him. Lisandro arrived early this morning, we’ll see how he’s doing, and I’d like him to be able to play when he’s fit. I haven’t been able to talk to him yet, but if he is fit he will definitely play. I have to talk and define everything”.

He doesn’t compare it to Mexico

Lionel Scaloni gave something to talk about, for the media he said that the selection of Honduras was not chosen because it is similar to Mexico.
“Honduras is a good team. We didn’t want to play against Honduras because they look like Mexico, but because they came out as a rival and we were really interested in them. They don’t have to play the same way because they are from the same confederation.” .

Inter Miami player Gonzalo Higuaín took advantage of the Argentina national team’s stay at his club’s facilities, which was the perfect reason to visit his former teammates.
El Pipita visited the facilities and began to hug all members of the Albiceleste.

Coach Diego Vázquez had to make a last minute substitution in the Honduras selection for the FIFA game with Argentina. Marcelo Pereira had to leave the training camp because of an injury against Motagua and Honduras Progreso, which means that he will not only miss the game against Albiceleste, but also against Guatemala.

See also  'The truth will be told' - Ex-Liverpool prospect Bobby Duncan hits back at former agent over Anfield exit
19:13 2 hours ago

I dream of meeting Messi

Looking ahead to the game against Argentina in Miami, Minnesota United midfielder Kervin Arriaga is one of the players who could be key for the Hondurans as he has become one of the pillars of the ‘H’. He also spoke about what it means to face Lionel Messi.
“It’s a dream to meet Messi, it’s nice to see those people that we only saw on TV as children. I don’t know how we will play tactically; it would be nice if I could play.”

They get criticized for everything

Kervin Arriaga took the time to talk about the pressure placed on the players of the Honduran national team and the criticism they face for facing various rivals:
“The truth is that we are criticized for everything. If we play a friendly against Guatemala, without belittling, or against anyone, they are not criticized. Now we have to enjoy this game.”

Coach Lionel Scaloni led Argentina’s first training session before the game against Honduras. And in it, he made clear his idea of ​​consolidating the work on the team that could start playing the World Cup in Qatar against Saudi Arabia.
Most of the players Scaloni considers starters will start: Emiliano Martínez in goal, Nicolás Otamendi in central defence, Rodrigo De Paul and Leandro Paredes in the middle and Lionel Messi, ngel Di María and Lautaro Martínez in attack.

Paulo Dybala, the only one to work separately, said he chose to continue his career with Italy’s Roma, thinking of the 2022 World Cup in Qatar and the possibility of having a place among the last 26 calls.
“I made the decision to think about the World Cup and the national team. I played for Juventus for many years and I knew it was difficult to continue in Italy, but I knew that the competition and the adjustment would cost me nothing explains Dybala. .

Paulo Dybala confessed after being left out of Brazil’s last Copa America:
“I have never been angry or had a bad reaction to the coaching staff at any time. That year had not been the best due to injuries”, “I am a very self-critical person and I always try to improve in order to give my best . When I saw the result, I was very happy for the group. They were my teammates and I have been good friends for a long time.”

They will miss the friendly ones

Lionel Scaloni’s squad trained at the Pink facility, which belongs to Inter in Miami. In recent hours, Nicolás González has joined the group, while the coaching staff are still confused about the visa situation of Cristian Romero and Lisandro Martínez, who will miss the friendly against Honduras.
El Cuti and Licha remain in Argentina because they were unable to process their visas to enter the United States after the papers failed to be certified in the offices where they are documented due to being closed for the past week due to mourning over the death of Queen Elizabeth II.

Tune in here Argentina vs Honduras in the friendly match

What time is the match between Argentina and Honduras for a friendly match?

Where and how to watch Argentina vs Honduras live

The match will not be televised.
If you want to watch the match live online, VAVEL Mexico is your best option.

This will be the second time these two teams have met in a friendly, so it will be a big commitment for both teams who will try to grow the record, all to arrive in good shape for the World Cup.
Argentina 1-0 Honduras, May 27, 2016, Friendlies

Watch out for this Argentinian player

Beware of these Honduras players