In the form of Icon star Allu Arjun, another PAN India star evolved from the Telugu language. His Pushpa film made a stunning impression on the masses, and Allu Arjun’s performance is considered his best yet.

Today, the actor received the GQ-Leading Man of the Year Award. Allu Arjun wore a black suit while receiving the award. As always, the actor redefined style as he looked super cool and elegant.

The entire GQ team traveled to Hyderabad to present this award to Allu Arjun, and a celebration was organized at the iconic Taj Falukhnama Palace. Allu Arjun became the first actor from Tollywood to receive this award. GQ generally highlights the work of Bollywood stars like Deepika, Ranveer, Vicky Kaushal and Karthik Aaryan.

On the work front, he will soon take part in the shooting of Pushpa 2, one of the highly anticipated PAN Indian films. Produced by Mythri Movie Makers, this Sukumar director features Rashmika Mandanna as the female lead. 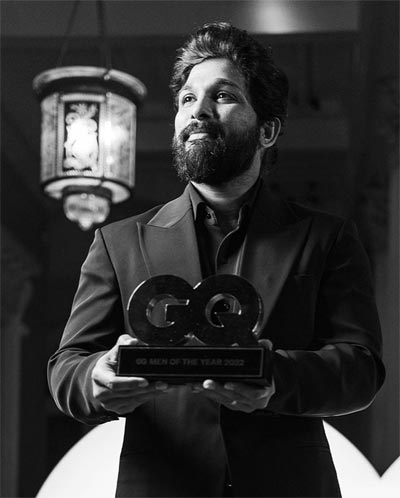 Articles that may interest you: