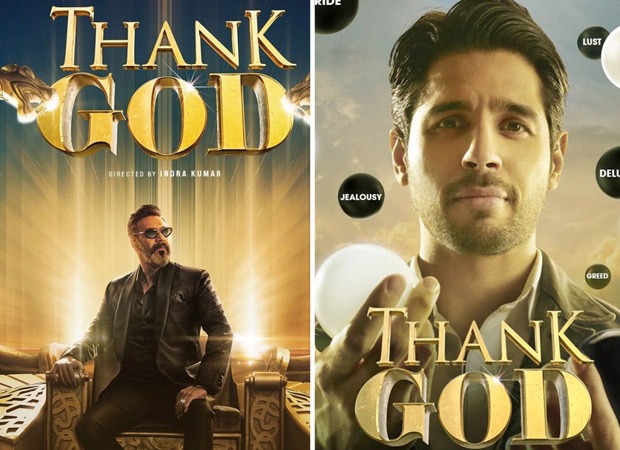 Just a day ago, we reported in an exclusive news story that the trailer for thank God comes out on September 9. Just before release, the creators decided to give everyone a glimpse of the film’s characters and released character posters of the male leads, Ajay Devgn and Sidharth Malhotra. The actors will be seen in the roles of Chitragupt and the common man respectively.

Recently, a poster of Ajay Devgn was released depicting the modern avatar of Chitragupt, who according to Indian mythology is a record holder of human deeds in heaven. The actor was featured in an all-black, well-fitting avatar for his character in the film. His poster was released with the caption: “This Diwali, Chitragupt is coming to play the game of life with you and your family! Get ready for the big release of #ThankGod!”

On the other hand, Sidharth Malhotra also looked friendly in his gentleman avatar. The actor is expected to play the role of an ordinary man. His poster was released with the caption that said, “This Diwali, hoga sabhi karmon ka hisaab, when a common man comes face to face with Chitragupt in the game of life!”

Besides, she thank God will also reunite Ajay Devgn and Sidharth Malhotra with their The De Pyaar De and Aiyaari co-star Rakul Preet Singh. The film is expected to be a comedy directed by Indra Kumar and produced by T-Series. While the trailer is set to air on September 9, the film is expected to release on October 25.