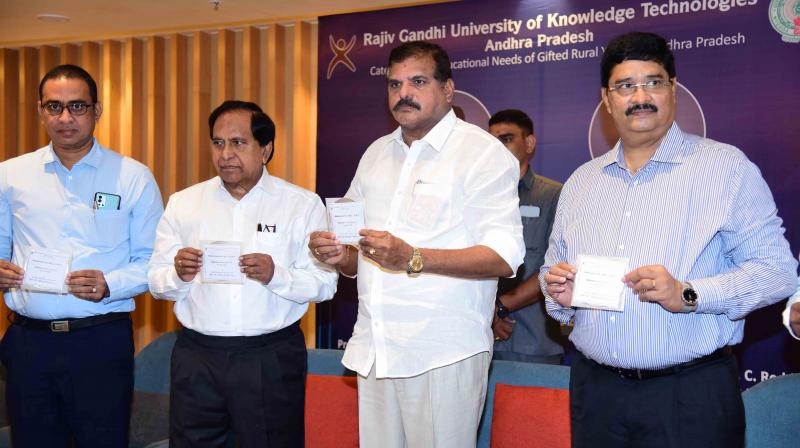 He addressed the media here, saying that 77 percent of those who have been granted access to these institutions come from government schools and the rest from private institutions. Even the top 20 ranks have been packed in by government students and model schools.

RGUKTs had been started to provide technical higher education at IIT level to poor students from rural areas. Admission to these institutes is based on grades obtained in the 10e Classroom exams in a transparent way. No recommendations are made for admission to IIITs, the minister emphasized.

For the convenience of students and parents, steps have been taken to provide counseling in four state RGUKT campuses in Nuzividu in Eluru district, RK Valley in Idupulapaya in YSR district, Etcherla in Srikakulam district and in Ongole . There are a total of 4,400 seats with 1,100 seats on each campus.

Satyanarayana said the results showed that 66.04 percent of seats were secured by girls and 33.96 percent by boys.

The minister insisted that Prime Minister YS Jagan Mohan Reddy is willing to spend any amount on behalf of the government for the development of IIITs, be it infrastructure or other facilities. “Our CM is committed to educating our state’s poor students into world-class citizens,” he stated.

RGUKT Chancellor KC Reddy and Vice Chancellor Professor K. Hema Chandra Reddy said the list of shortlisted candidates for admission is available on the website www.rgukt.in. Candidates should download their respective hall tickets and call letters from the website before attending the counseling.

Directors of IIIT campuses Prof. dr. BFG Srinivasa Rao, Professor B. Jayarami Reddy, Professor P. Jagadishwar Rao, and Covenant of Admission SSSV Gopalaraju were among those in attendance at the press conference.